Sri Chinmoy is known to the world as a deeply mystical poet. He came from the great tradition of Bengali poets and, throughout his 76 years on earth, he completed 120,000 poems in both Bengali and English. His poetry is spiritual in theme and contains myriad expressions of the inner journey, beautiful nature imagery and timeless wisdom. Sri Chinmoy wrote in both English and his native Bengali, with many of his lyrical English poems being his own translations of the Bengali, which he also often set to music. In rhymed and free verse, Sri Chinmoy breathtakingly captures the experiences and explorations of the truth-seeker. All poems are written from personal experience embuing the poetry with the consciousness of genuine mysticism.

The first collection of poems are selected from his early poems written during his time in the Sri Aurobindo Ashram. Originally written in his native Bengali Sri Chinmoy translated them into English, something more which is quite unusual – these poems were set to music. These devotional songs bringing a new dimension to his poetry. 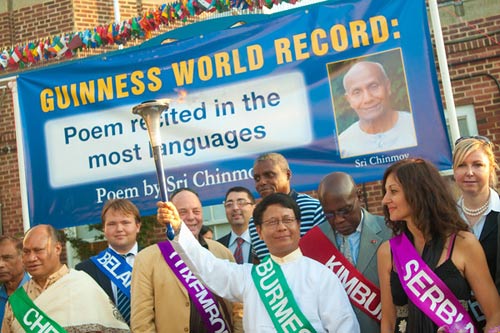 The Sri Chinmoy Poetry Festival is a real festival — occurring every summer in New York City since 2009 and throughout the year in venues around the world.

The Festival offers a unique window into the world of poetry interwoven with spiritual vision, musical and artistic elements. It resonates with spiritual truth, musical performances and the beauty of nature and art.

In August 2010 an international group of people recited a six-line poem called “Be Like a Child” in 146 languages, as part of the festivities of the Sri Chinmoy Poetry Festival (New York), making it the most translated poem, according to Guinness World Records.

“Be like a child,
Act like a child.
Go from one flower to another.
In your heart-garden
Until you find complete joy
And perfect satisfaction.”