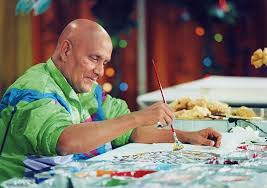 The Sri Chinmoy Centres display exhibitions of Sri Chinmoy’s artwork in galleries and exhibition spaces around the world.

Sri Chinmoy began painting on November 19th, 1974. His first picture was a simple rose but from these humble beginnings, Sri Chinmoy immersed himself in his newfound project completing many 100s of new paintings. His style of painting is very spontaneous and unique. Using a variety of sponges, brushes and even his own hand, he creates bold sweeping strokes of multifarious colors. He paints at a rapid yet unhurried pace. When painting Sri Chinmoy says he enters a meditative consciousness. He does not use his mind or think about what to paint. Instead, he follows the spontaneous creativity his meditation gives him easy access to. When asked whether he has anything in mind when painting a bird. Sri Chinmoy replied

I have nothing in mind. I try to keep my mind as empty, vacant and tranquil as possible. The outer mind is like the surface of the sea. On the surface, the sea is full of waves and surges; it is all restlessness. But when we dive deep below, the same sea is all peace, calmness and quiet. It is there that we find the source of creativity.” 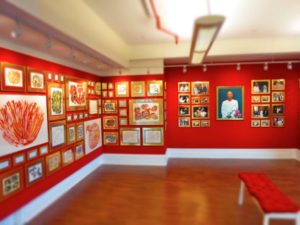 Over a 33 year span, he created 140,000 abstract paintings in a style that he called in his native Bengali Jharna-Kala, which translates as “Fountain-Art” – art that comes in a spontaneous flow directly from the inner source. A gallery of Jharna Kala paintings creates a powerful effect as the variety and light of the paintings creates both a joyful and peaceful effect. Each painting has its own uniqueness and has a capacity to absorb the viewer in the painting. Between 1991 and 2007, he created a series of bird drawings which he called Dream-Freedom-Peace-Birds, or simply Soul-Birds, which numbered 16 million birds in total. For Sri Chinmoy, these birds embodied the infinite freedom of the human soul.

Sri Chinmoy paints and draws rapidly and spontaneously in a meditative way. His mystical, often abstract works of art, varying from miniatures to murals, include a multiplicity of styles and techniques.

Over the years, Sri Chinmoy’s paintings and drawings have been exhibited in galleries around the world, such as the Carrousel du Louvre in Paris, The Mall Gallery London, The National Gallery in Ottawa, the United Nations building in New York and the national parliaments of Australia, Ukraine and New Zealand.