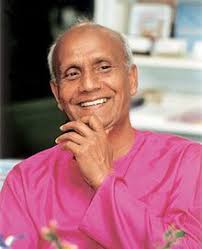 Sri Chinmoy was born in Bengal, India in 1931. Having lost both his parents at the age of 12, he entered the Sri Aurobindo Ashram in the South of India where he would spend the next 20 years engaged in an intense spiritual discipline – his days filled with various ashram responsibilities, his nights devoted to countless hours of prayer and meditation.

In 1964, Sri Chinmoy followed an inner command to come to the West to share the spiritual wisdom of the East with aspiring seekers. For over four decades, Sri Chinmoy has inspired a worldwide organisation dedicated to promoting global harmony and individual self-transcendence. Sri Chinmoy has sought to combine the spirituality of the East with the dynamism of the West, and show through his personal example how spirituality can be brought into every aspect of life.

Sri Chinmoy explored countless fields of activity in his tireless quest to inspire his fellow citizens of the world. Aside from playing the role of a spiritual guide or Guru for countless seekers in over 140 countries, he composed thousands of meditative songs, created millions of contemplative artworks, surpassed as an athlete; excelled as a decathlon and then as a long-distance runner and weightlifter. Sri Chinmoy was prolific as both poet and author, lectured at hundreds of universities, met with many prominent individuals to share his dreams of a peaceful world. He offered hundreds of free concerts of his meditative music and founded a global torch really – the Sri Chinmoy Oneness-Home Peace Run – a global torch relay for peace. He played a significant role at the United Nations Headquarters in New York, as director of the twice-weekly Peace Meditations for 37 years and would also come to treasure Nelson Mandela, Mikhail Gorbachev and Mother Teresa as some of his closest friends. Describing himself first and foremost as a “God-lover and Truth-seeker” and as a “student of peace”, Sri Chinmoy approached all his endeavours with heartfelt humility, unswerving dedication and the simple hope of inspiring others to look inside themselves and discover the divinity he saw in every single person.

Underlying all of Sri Chinmoy’s efforts and initiatives is his recurring theme that humanity belongs to one world-family, and that world-harmony is both the birthright and final destiny of humanity which each human being can help to create.

My ultimate goal is for the whole world to walk together in peace and oneness… This ultimate goal requires a transformation of human nature. There must be a great synthesis between the inner life and the outer life. The inner life wants love, and the outer life wants power. Now we are all exercising the love of power. But a day will come when this world will be inundated with the power that loves. Only the power that loves can change the world. My ultimate goal is for the power of love to replace the love of power within each individual. At that time, world-peace can be achieved, revealed, offered and manifested on earth.” 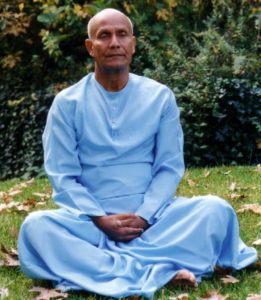 With the broad appeal and full acceptance of other cultural and religious beliefs, Sri Chinmoy’s views lend themselves to a wide audience. He has become well-known for his inspirational message of optimism and hope, his unswerving belief in the unlimited potential of each individual and in the innate goodness of the human spirit, and his belief in the oneness of all humankind.

With his passing on October 11th, 2007, Sri Chinmoy offered a vast legacy spanning countless fields of endeavour anchored firmly in the hearts of all those individuals whose lives had been touched by his. Whilst it can be difficult to comprehend a life that was truly consecrated to serving the unlimited potential of the human spirit, we can be certain that so long as Sri Chinmoy’s melodies still ring throughout the concert halls of the world, his artworks enchant the eyes of soulful observers and his teachings nurture the minds of peace-lovers worldwide, his life will continue to reverberate in this world of ours.